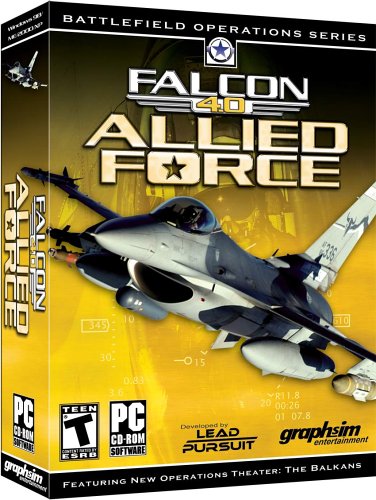 Falcon 4.0: Allied Force is the definition of depth when it comes to the interactive experience of combat flight. All declassified features of Lockheed Martin’s F-16 are fully controllable and functional, you won’t turn anything off or on that doesn’t affect some function of your jet. Your responsibilities range from controlling the flow of your fuel supply to operating realistic air-to-air and air-to-ground radar.

The scope of Allied Force extends far beyond such desired elements, requiring air traffic control commands for takeoff, landing and identifying targets through AWACS before shooting them down. Even more lifelike is the fact that you have to check in and check out with AWACS to complete a mission successfully. You’ll feel the pressure of succeeding with friendly aircraft all around you that will be in line to land in sequence right behind and in front of you after a mission. There’s a full-scale war surrounding your every move, so you’ll hear real time chatter of pilots calmly landing as well as expressing acute fear when their lives are seriously threatened in battle. There are times when you’ll hear all of this in one fell swoop, before you ever taxi onto the runway for takeoff. Every aspect of a campaign is running in real time and that’s the real beauty of Faclon. This creates more interest than any storyline due to the variety it dictates. The same thing never happens twice in any mission, so you won’t be able to adjust your strategy based on where you were last shot down.

There isn’t a respawn in this game. If you get shot down and end the mission, you’ll be put in the cockpit of the jet that was second to you in formation and so on, should you continue the mission once back at the briefing screen. Your squadron loses a plane every time you get shot down, so if you’re in a flight of four, for instance, and get killed three times, you’ll be the only friendly left flying in the area.

There is often much left to be desired from the artificial intelligence of interactive software, but Falcon has just about every AI engine that I’ve seen beat dead to rights. This combat flight simulator features what seem to be real people whom you have to go up against, giving you good reason to choose your battles. Let’s say you’ve identified hostile aircraft and are willing to follow him to make sure he never comes back, but suddenly you notice three dots on your screen as you close for the kill. Those are his wingmen and you’re about to be engaged in a four to one aerial assault. You get a warning that a missile has been launched in your direction. There is a true to life technique for dodging both air-to-air and surface-to-air missiles. If you haven’t learned those techniques, you’re about to go blind (lose all radar and heads up display function of your jet) and either eject or be blown to bits.

Flying the F-16 in Allied Force can be frustrating, but it’s one interactive software application that will make you feel as if you’ve accomplished something constructive in the free time you spend with it. The best part of the sim, the depth, can be the most frustrating, but it’s also what makes the replay value of this game nearly infinite if you’ve ever wondered what it would be like to be a fighter pilot, lacking only the desire to risk your actual life.